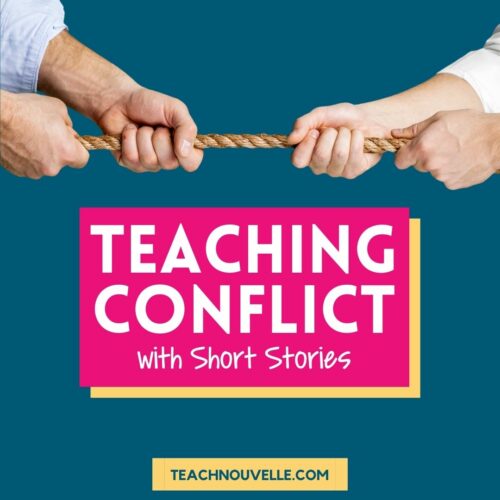 Looking for tips & text recommendations for teaching conflict in literature? This post has stories & extension activities to engage students!

In a continuation of my series on teaching literary elements, today I’m sharing ideas for teaching conflict in literature. While conflict is sometimes easy to identify, it can be harder for students to determine *how* an author creates and heightens conflict using setting, characterization, and tone. I find that using a variety of shorter examples, rather than teaching, say, a novel or a play, helps students to stay engaged.

So with no further ado, here are 5 short texts you can use for teaching conflict.

In this short story, the Person vs. Person conflict happens between a husband and wife. While washing the dishes, they get into an argument about interracial marriage.

I think that, before teaching this story, it’s important to give students some context about the history of interracial marriage in the US. his story was published, interracial marriage had been legal in the US for less than twenty years. The Supreme Court made it legal on a federal level in 1967, after the case Loving vs. Virginia. However, some states, like Mississippi and Alabama, did not change their state laws until much later, 1987 and 2000, respectively. More disturbing is the fact that 48% of voters in MS and 41% in AL voted *against* changing their state laws.

This post from Learning for Justice has teaching ideas that will help you go beyond just teaching how the author illustrates the conflict, and support students in unpacking their own racial and gender biases.

This sci-fi short story depicts a conflict of Person vs. Technology. In a dystopian future, AI-controlled droids called “Zombies” roam the free, on a deadly mission. They have eight legs, resembling a “giant shiny metal spider.” Although they were designed to repair pipelines (and kill anyone who gets too close), it seems like they might not be under the control of the oil companies anymore. Are they sentient? One woman, armed with only her guitar, is the only person who dares to go near them.

Note: This story has a few curse words and describes a physically abusive relationship. As with any material, please read and decide for yourself if it’s a good fit for your classroom.

This story is available for free on the Lightspeed Magazine website.

More examples of conflict in literature

“Pray for Me” by The Weeknd feat. Kendrick Lamar (MS & HS)

“Tell me, who’s gon’ save me from myself,

when this life is all I know?

Tell me who’s gon’ save me from this hell?

Without you, I’m all alone.”

This song presents a conflicted hero: someone who worries about losing himself in his responsibilities. And yet, the protagonist finds the power within himself (and his community) to rise up. This song accompanies the powerful trailer for Marvel’s Black Panther, and so you could do a combined song and video analysis. I love discussing superheroes as literature, and this song is the perfect inner monologue of a hero. Students can dig deep in examining his motivations and hesitations.

I think this song is an especially great choice because it will already be familiar to many students. I love anything that encourages students to look for literary themes in popular media.

Are you enjoying these suggestions for teaching conflict in literature? Sign up for my newsletter to get tips like these delivered right to your inbox!

I love B99 for so many reasons! It has a diverse cast, strong female leads, and it’s hilarious. The show’s lighthearted tone makes it an ideal choice for introducing heavy topics in an approachable manner. In this episode, the inciting event happens when Sgt. Jeffords (played by Terry Crews) is off duty, searching the streets of his neighborhood for his daughter’s favorite stuffed animal (Moo Moo). While he is searching on foot, a fellow NYPD officer stops, harasses, and even cuffs Jeffords. Jeffords believes the officer stops him for “walking while Black.”

Jeffords feels incredibly conflicted about whether he should submit a formal complaint against the officer, and also faces conflict from his superior, Captain Holt. In the end, Jeffords files the complaint and is subsequently passed over for a promotion. He believes this to be a retaliatory measure.

B99 takes a hard look at the undercurrent of systemic racism present in police departments, and the dilemmas that “good cops” find themself in (person vs. society). But it’s able to do so without feeling forced, and there’s a lot of humor and heart along the way.

Brooklyn Nine-Nine is available to stream on Hulu and Peacock

“Come on Scully, it’ll be a nice trip to the forest.”

Something is killing logging crews in the Pacific Northwest, and it’s up to Mulder and Scully to find out who, or what, is responsible for the deaths. It’s not “eco-terrorists” as the logging company suspects, but a swarm of prehistoric insects the logging crews inadvertently released when they cut down a protected, old-growth tree.

This episode offers several examples of conflict; person vs. nature, the conflict between the “eco-terrorists” and the logging company, and interpersonal conflicts between the characters when they disagree on the best course of action when trapped in the woods. And of course, the X-Files has an ever-present conflict between Mulder’s search for the truth and the FBI/government’s mission of obfuscation.

This episode is available to stream on Hulu. 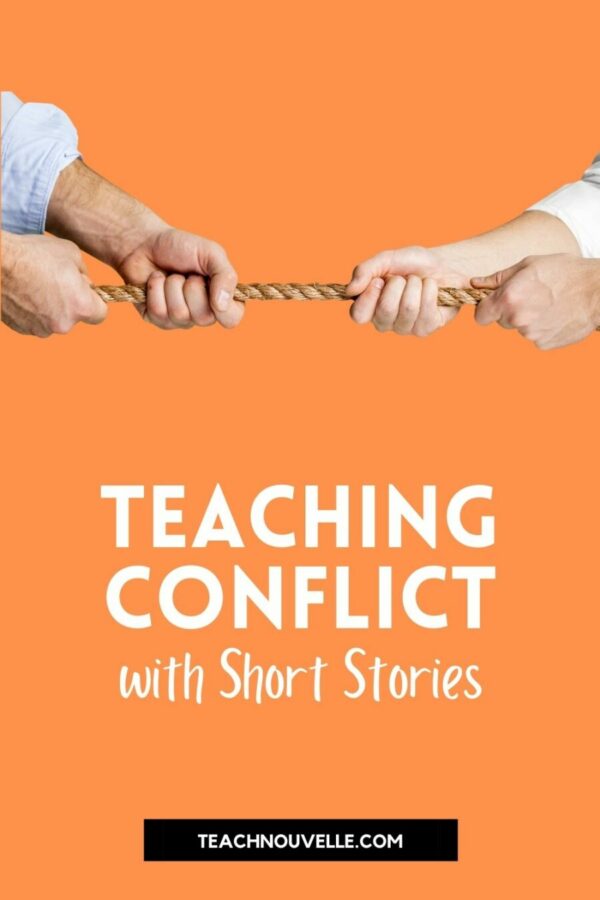 I hope this post gave you some new texts and tools for teaching conflict in literature! Do you have a favorite literary example of conflict? Comment below so we can all learn!

Want to read more about teaching literary elements? In these posts, I share texts and ideas for teaching symbolism, setting, figurative language, suspense and pacing, characterization, metaphor, and irony. 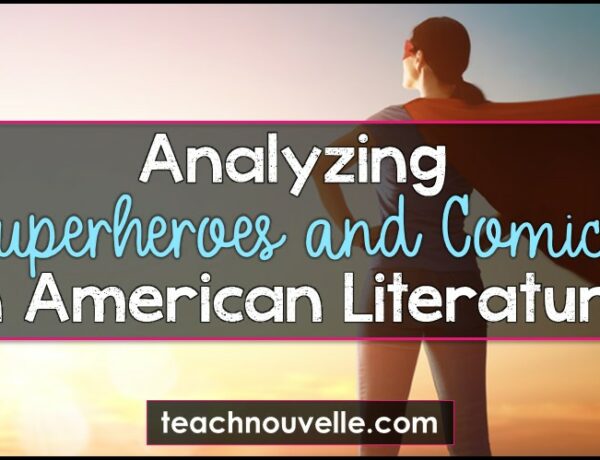 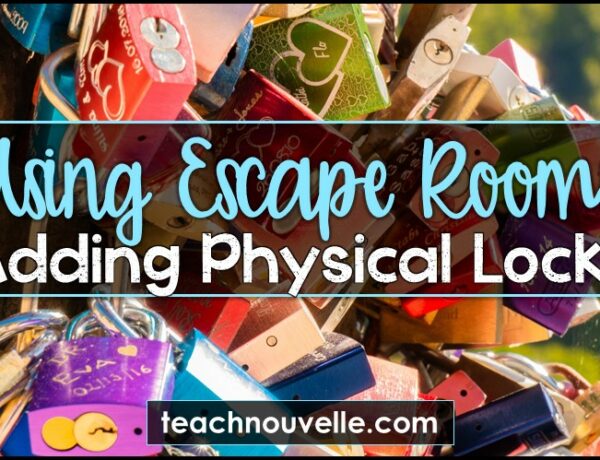 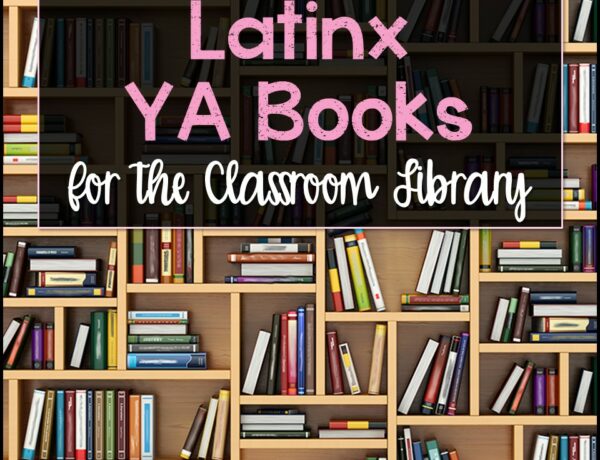 Latinx YA Books for Your Classroom Library

A New Puzzle Book for Kids