Have you been told you should be teaching executive functioning? Is this a totally overwhelming proposition? Where do you even start? Let’s break it down.

Executive Functioning is the complex way the brain ‘works’. We use these skills to make decisions, choices, and plans. When we use strong executive functioning, we work smarter. We can delay gratification when working towards a goal, plan for the future, and avoid feeling stuck when our plan hits a snag. A lack of executive function skills leads to impulsive/reckless behavior, poor planning/time management, and an inability to stick with a task from start to finish.

Sound familiar? Of course, it’s normal human behavior to be occasionally careless with our time, or to make a rash decision. But if students are struggling with these basic skills every day, in every task, that will negatively impact their performance in school. Studies show that kids who lack these executive functioning skills will perform at a lower academic level. As teachers we we want to give students as much opportunity to practice these skills as possible.

Teaching executive functioning means focusing on building three skill areas: working memory, cognitive flexibility, and inhibitory control. We can support these areas throughout our ELA curriculum. Today, I want to focus on how Escape Rooms give students opportunities to hone these functions.

We can break executive functioning into eight main skills: 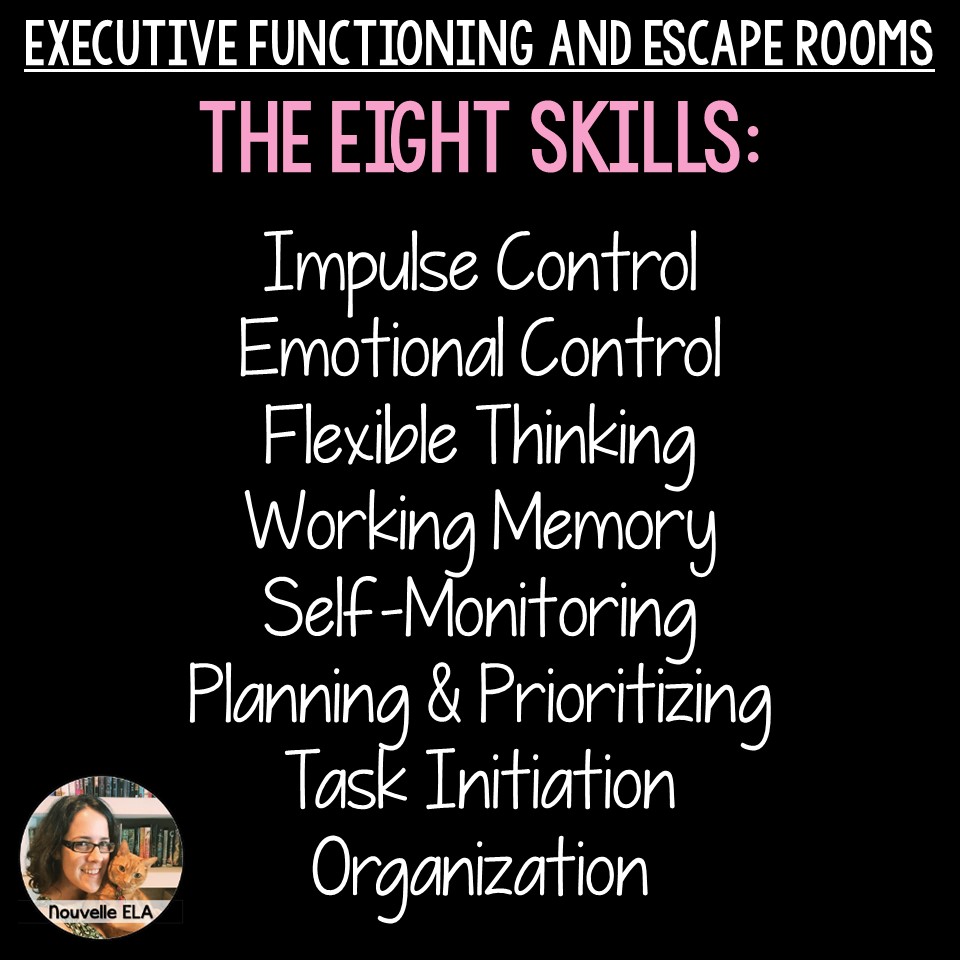 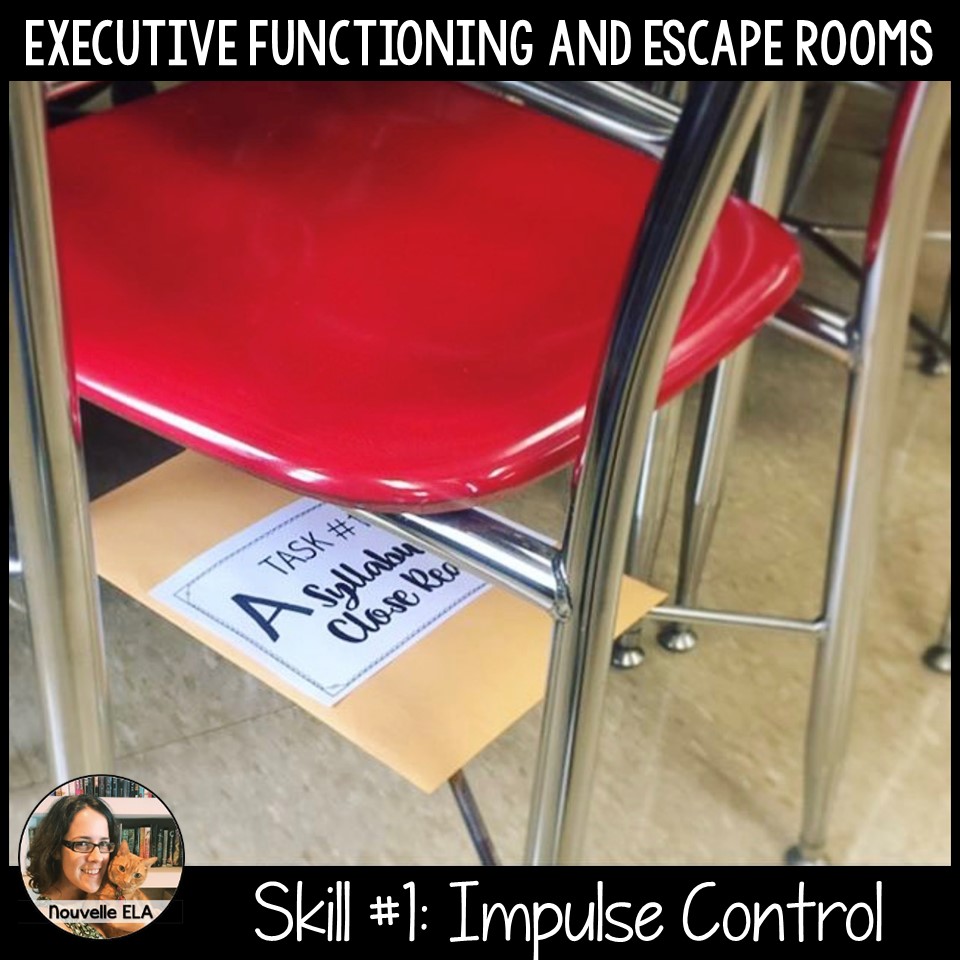 Definition: Commonly known as “self-control”, these are the social skills we used to keep our emotions and reactions in check. It’s the skill required to stand in a line, wait for your turn to speak, and keep your hands to yourself. Some cultures value manifestations of this skill more than others, but we recognize that our academic norms in the United States require impulse control for success.

In Escape Rooms: Often Escape Rooms include competition. This means it’s important for students to use enough self-control to avoid shouting out the answers as soon as they have that “Ah ha!” moment. Also, if your Escape Room is set up as a station activity, students must focus on and complete a task before jumping to the next one. 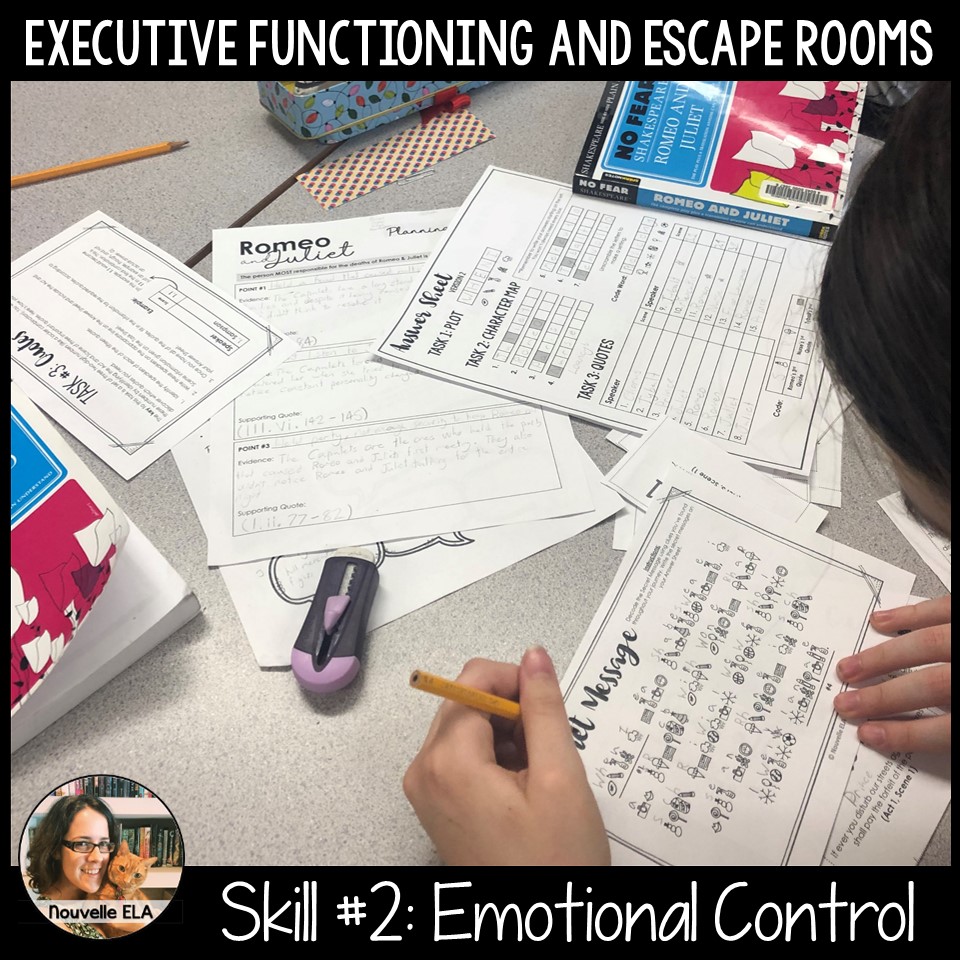 Definition: Like impulse control, this skill allows us to keep trying when faced with adversity or failure. Students with emotional control issues will often cry, give up, or become angry when they don’t get the correct answer right away. The trend of “Growth Mindset” is one way educators work to integrate emotional control into their classrooms.

In Escape Rooms: Students can develop resiliency. How do they respond to difficulties solving a puzzle? Are they ready to brainstorm alternate solutions? How long are they willing to keep trying without becoming inactive? Escape Rooms boost this skill because they are a game for teams. The outcome doesn’t rely on one student’s skills but instead values the contributions and success of the whole group. 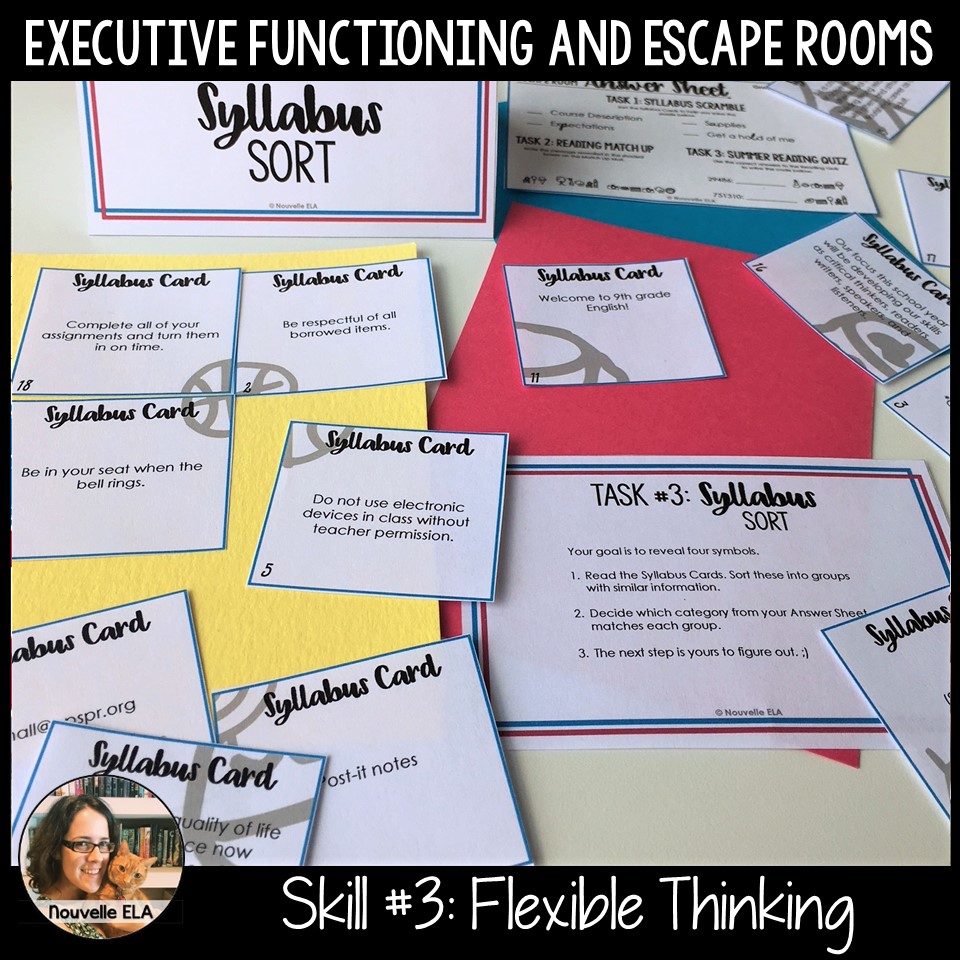 Definition: Also called cognitive flexibility, this skill allows us to “shift gears” and approach a sticky problem from a different angle.

In Escape Rooms: This is a big one! Escape Room clues can be very abstract. Sometimes, it’s not obvious how to make the puzzle “work”. Students must finagle puzzles. Your clues may include visual puzzles that students need to reorient or flip to make sense of them. When students confront riddles, they often approach words from a figurative angle rather than a literal one. 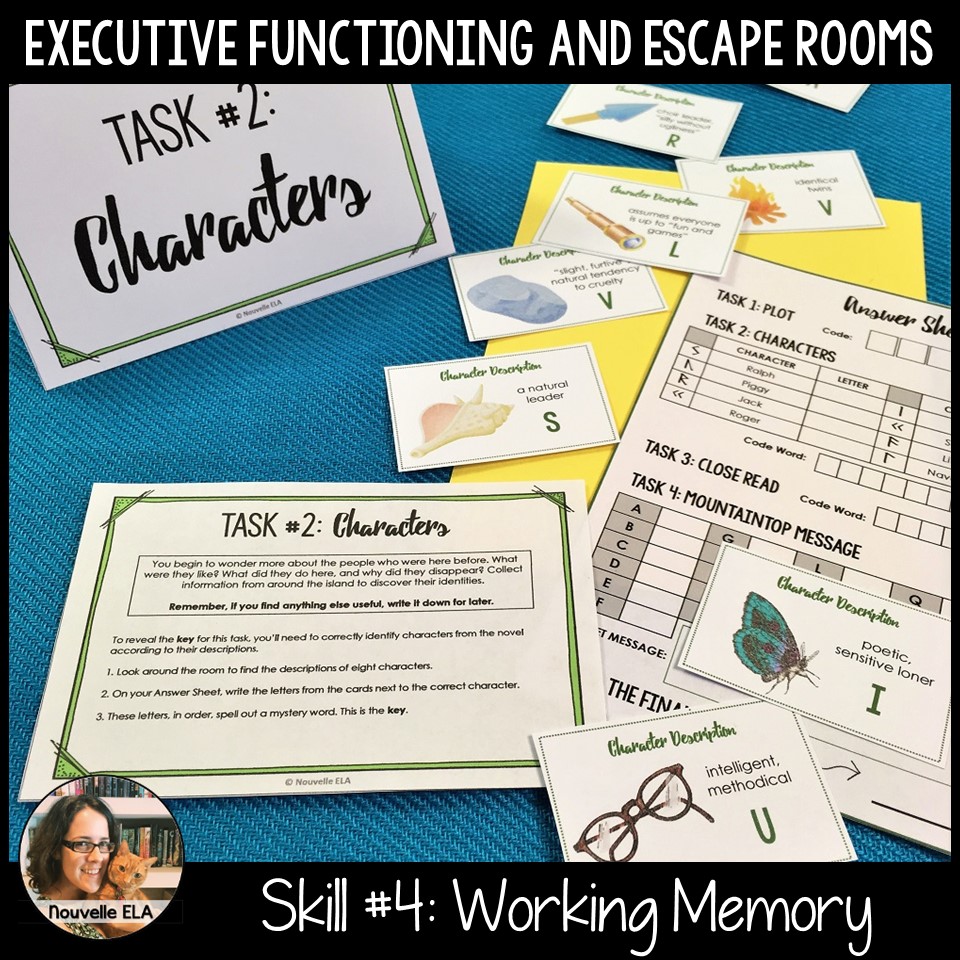 Definition: “Working memory is the ability to hold on to new information so that it can be used or connected with existing info in some way. It’s like a temporary sticky note in our brain.” (from Understood.com)

In Escape Rooms: One of the most important skills supported by Escape Rooms is storing short-term information to complete tasks. Students have to remember clues they’ve found and what they should accomplish in each task. At the same time, they strengthen the connections to their long-term memory as they rely on background information they’ve studied. Remembering patterns is also part of working memory, and many Escape Room puzzles revolve around finishing a pattern or extrapolating from incomplete data. 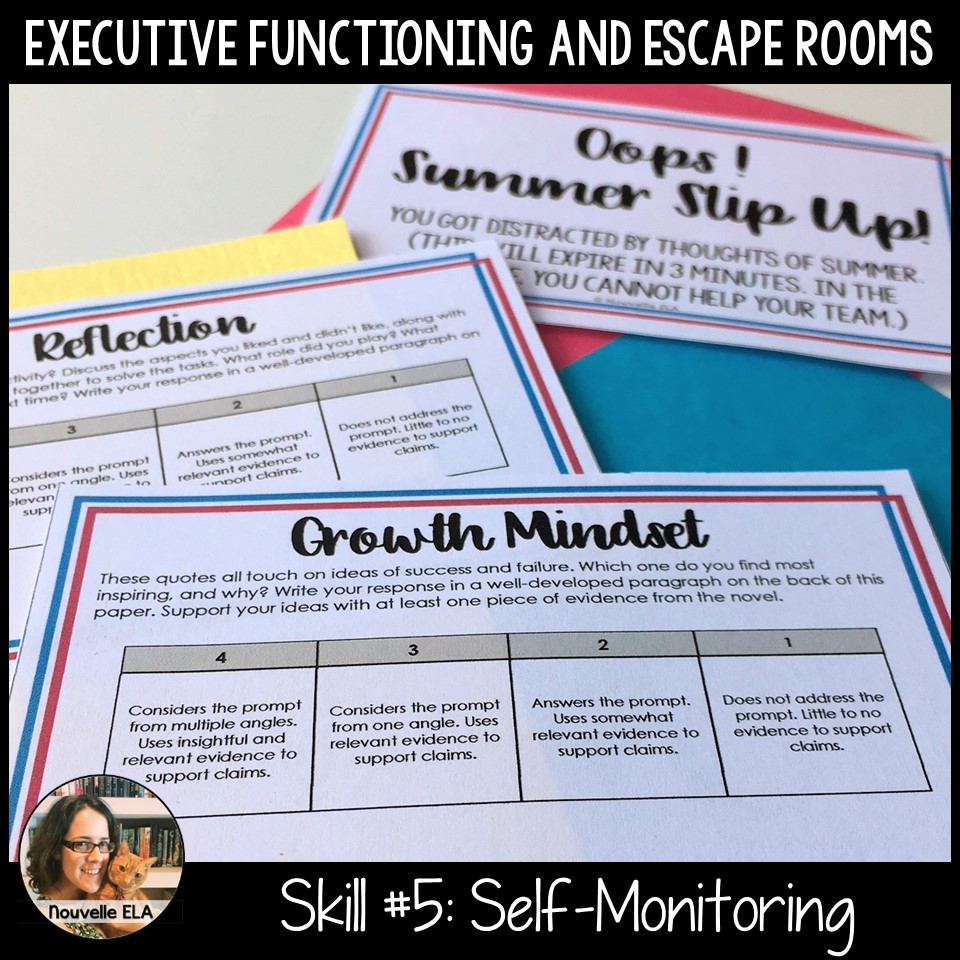 Definition: “Self-monitoring is a skill used to keep track of your own actions and performance.” (from Understood.com)

In Escape Rooms: Self-monitoring is vital in classwork and homework. Students check their work in math, notice spelling errors in their writing, and much more. It’s especially useful in Escape Rooms since students are working against the clock. When students have limited time to solve a problem, it forces them to continually reassess their progress. 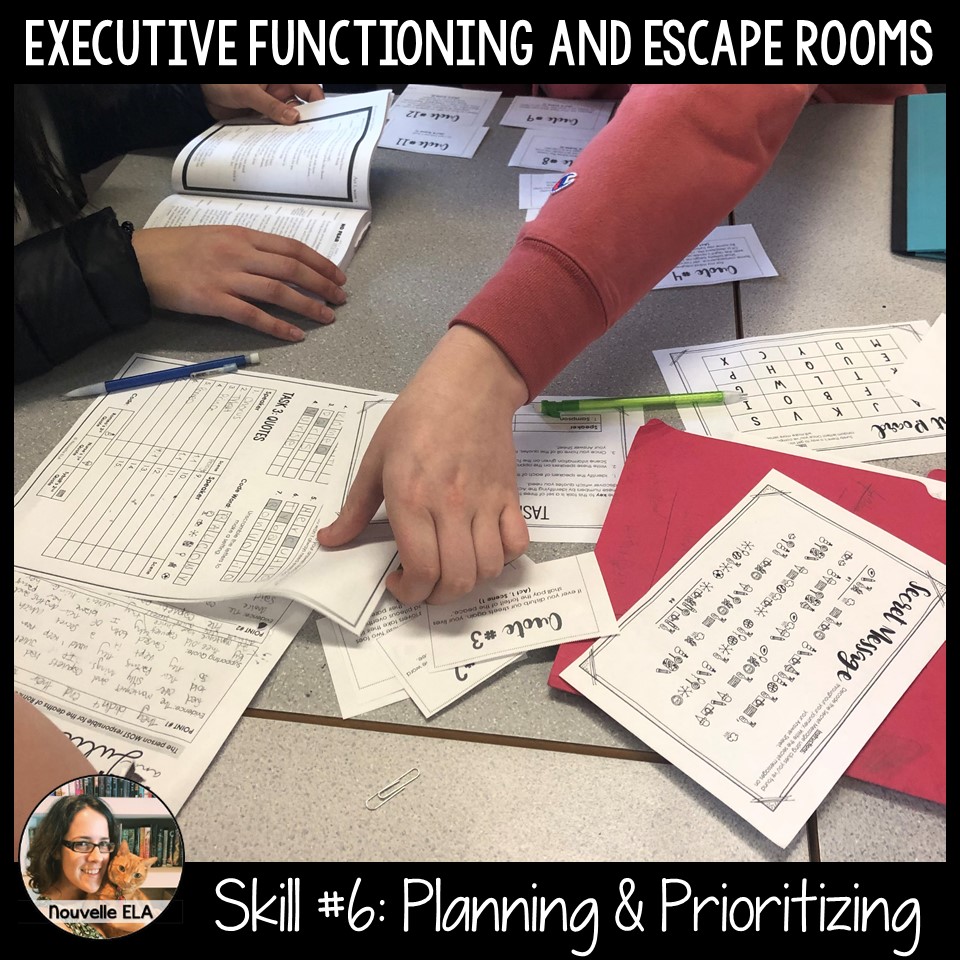 Definition: We use this skill when we make a to-do list and decide which of those items to accomplish first.

In Escape Rooms: Most Escape Rooms you set up in your classroom will be stations-based and your students will approach the tasks in any order they like. Groups will need to plan on how to divide up the tasks and prioritize and organize the information they find.

Students who lack these skills will attempt to solve the tasks in a seemingly random order or jump from task to task. They may have poor time management and struggle to rank tasks in order of importance. Using Escape Rooms throughout the year is a fun way to allow them to practice and refine these skills. 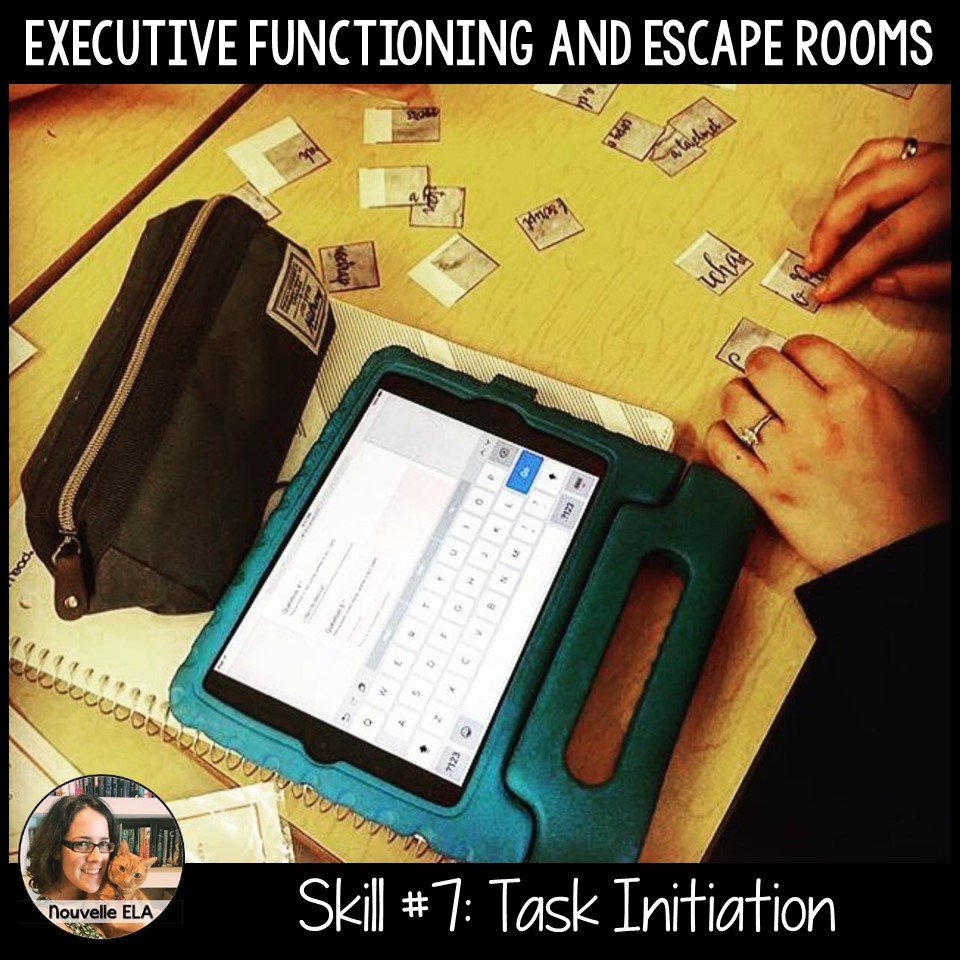 Definition: “Task initiation refers to our ability to be motivated, to take on new tasks, to stay perseverant with those tasks until its completion, even if we encounter challenges.” (from LDatschool.ca)

In Escape Rooms: It can be difficult for students to know where to start with Escape Rooms because there’s so much information. But the hustle and bustle of the game can motivate even the slowest starters! Escape Rooms make a great review game because they chunk the information into discrete tasks and students want to jump in. It’s great that students can tackle Escape Rooms non-linearly because they can choose a task that interests them. 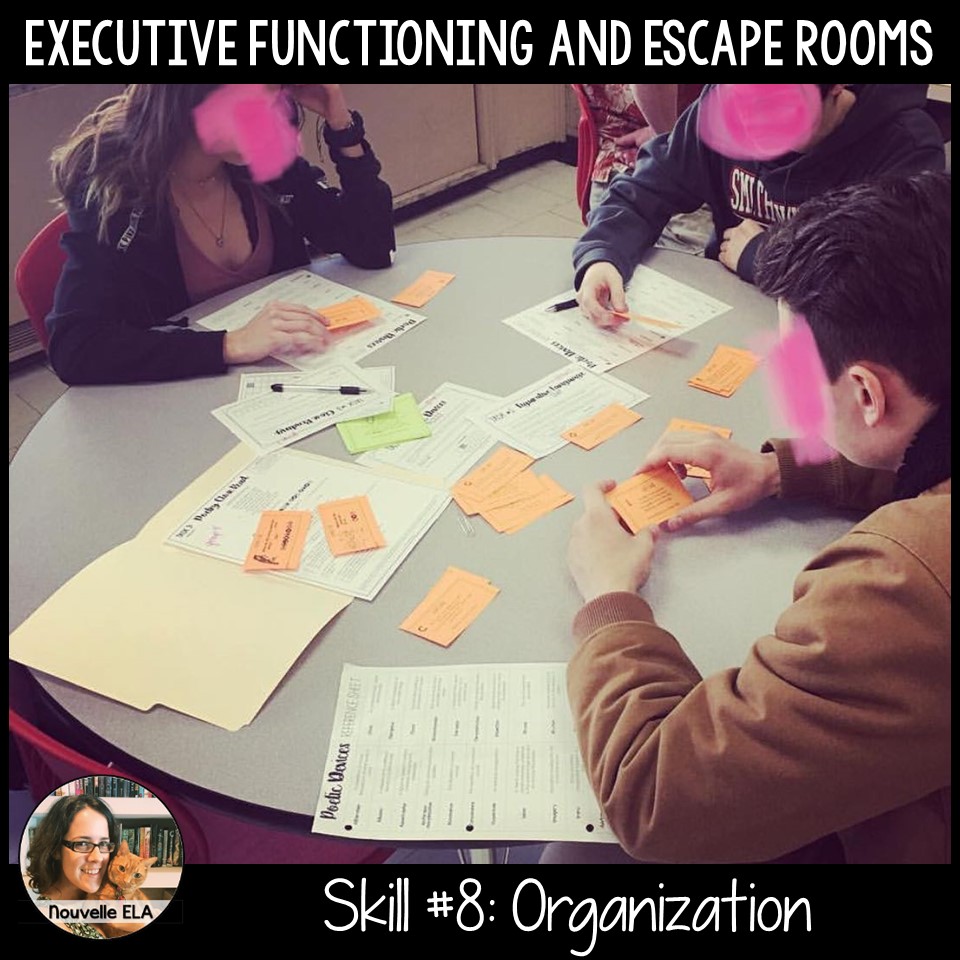 Definition: In this case, organizational skills are both literal and figurative. Students literally organize objects (like clues), and mentally organize information. They also make relevant associations between pieces of information.

In Escape Rooms: To successfully complete an Escape Room, students will have to organize the information they’ve found. Teachers often support this by color-coding clues according to the task they accompany. Some teachers will choose a sticker to use for specific clues.

After reading all of this information, your brain must be abuzz with ideas on how to integrate teaching executive functioning. This post only talks about it in conjunction with using an escape room. Have you ever used one of these games? If you haven’t and you aren’t sure where to start, you can visit this blog post on using them in the ELA classroom.

Maybe you are already a pro at using Escape Rooms in your class and you’re ready to make your own! It’s a great way to create a custom activity for whatever text your class is studying. Get started with these great resources.

What skill or skills do your students need the most help with? What are you excited to try? And what activities do you wish were around when you were a student? I’d love to hear your thoughts! Comment below, or reach out to me on IG @nouvelle_ela. 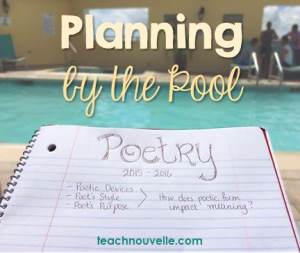 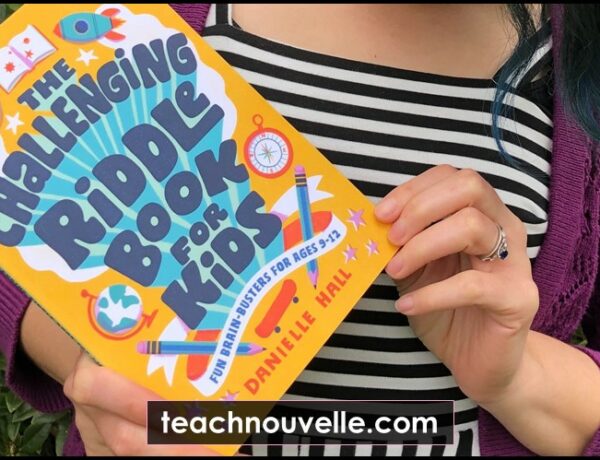 A New Riddle Book for Kids

15 MORE Songs for the ELA Classroom

Asian American YA Authors and Protags