The Giver. The Hunger Games. Matched. Unwind. Feed. Teaching dystopian literature can be a great way to expose students to types of government and societal control. Dystopian novels often begin with something that seems like a utopia, though. Everything seems great before the protagonist sees the strings that control the system. The Giver seems great until Jonas realizes what’s being kept from the community and at what cost. Feed seems like technology for everyone until we meet a character who doesn’t have access. The Hunger Games is obviously terrible right off the bat, so this isn’t a hard-and-fast rule, but to have dystopian, you must first consider what utopian looks like.

When my 8th graders read The Giver, I have them begin by researching some real-life utopias. We talk about the concept of utopias. Then, we start brainstorming what these communities might look like for each of them – what kind of freedoms they’d want to have, or what the ideological goals of their community might be. And of course, we look at utopias that have risen and fallen over the course of American history. Here’s a short list of some of my students’ favorites.

When you let your students research utopias, I think it’s important to keep content in mind. Some of these utopias had sexually liberal philosophies that your students could encounter in research. Others had polygamist ideals or even ventured into abusive situations like child marriage. The list below avoids all of these problems, BUT I just want you to be aware in case you let your students run free in their research.

George and Sophia Ripley founded their real-life utopia, Brook Farm, in West Roxbury, MA. It is pretty much what students would come up with if given the ability to imagine a utopia: “everyone does a job they prefer, and everyone shares the profit.” One of the ideas that students will confront in further research of this utopia, however, is that of financial security. If everyone is getting the same profit, there must be a leader who is responsible enough to first set some money aside in a rainy-day fund. Brook Farm eventually went bankrupt when one of their buildings was destroyed by fire and they had no money set aside to rebuild.

Sculptor Frank Stephens and architect Will Price founded Arden as a place of intellectual and artistic freedom. This is a great example of a utopia that’s “still going”. In their research, students will be able to get modern information as to what makes it work. Arden is a village and art colony and based on voluntary contributions of workers. The founding ideals followed the communist philosophies of Peter Kropotkin, and Stephens and Price wanted the village to be void of a central government. Older students could compare this utopia to the (failed) communism instituted in the Soviet Union.

Amos Bronson Alcott and Charles Lane founded their real-life utopia, Fruitlands. Fruitlands is interesting to students because it was a short-lived farming utopia that was strictly vegan AND didn’t use animal labor. In their research, students will also learn about the Transcendental values that governed the community. Since I introduce utopias to 8th graders, this is often their very first interaction with transcendentalism!

Octagon City was another failed agricultural utopian community with a principle of a vegetarian life. Located near Humboldt, Kansas, the town quickly failed when settlers were simply unprepared for the lifestyle. Researching this settlement is a great opportunity for students to imagine what a utopia would need to get “up and running” – it’s not enough to just strike out on your own without a plan.

Abolitionist Adin Ballou founded Hopedale in Worcester County, Massachusetts. Ballou promoted pacifism and socialism, and called his philosophy “practical Christianity.” One of the biggest differences between Hopedale and other utopian experiments is that Ballou never advocated for complete isolation. Even though members lived in the community, they could come and go as they pleased. The community also made advances in gender equality, though women were still largely relegated to domestic roles.

Architect Paolo Soleri founded Arcosanti in Arizona and meant to balance architecture and ecology. Residents call Arcosanti a utopian eco-city and still has between 50 and 100 residents. The community is still incomplete, though. It can house 5000 citizens, but never moved beyond a prototype phase in sustainable living. This is another cool research opportunity since Arcosanti isn’t isolated and many people have been able to visit, interview residents, and photograph the amazing structures.

Settlers built North American Phalanx in Colts Neck Township, in Monmouth County, New Jersey. Based on the philosophy of Charles Fourier, this settlement promoted ideals of communal living rather than private homes. The interesting aspect of this settlement for students is the dissolution of the community. They had a number of disputes over women’s rights and suffered losses from two fires. 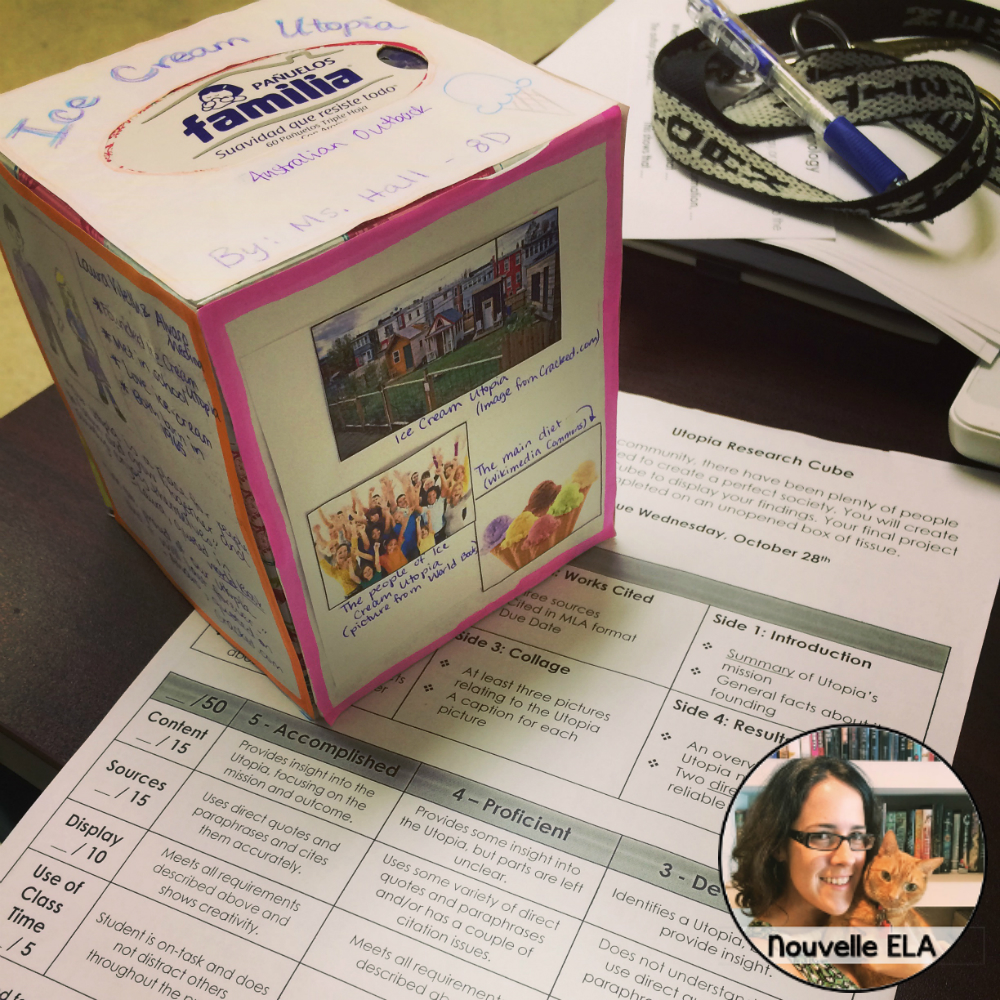 If you want a quick research project for your students, check out this Research Cube! If you’re looking for something more in-depth, I also have a Real-Life Utopias Portfolio Project.

LGBTQ+ YA Novels for Pride Month

Movement in the Classroom: Why My Students Don’t Have to Sit Still